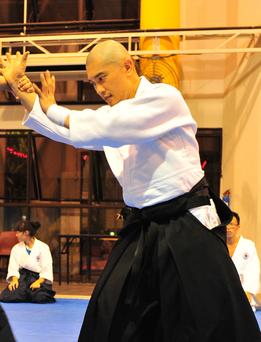 My current day job is being Sole proprietor of an Antique furniture Restoration Company with the hope to move onto teaching self defense on a full time basis as it is my passion.

I have trained in Aikido since early 2000s and been teaching the art for eight years since 2006. My present Grade is a third Dan from Aikikai Hombu dojo Graded by Etsuji Horii Shihan, 7th Dan from Hombu Dojo. I have trained with a number of teachers over the years. Spent a year in Australia in 2005 training under David Scott Sensei. I am presently training under Serge Beraud Sensei and Thierry Diagana Sensei from France. I teach two weekly classes at the Mumeishudan Aikido club and am the head of the Anchorvale Aikido club at Anchorvale Community Club where sixty students consisting of children, teenagers and adults of all ages are under my care. I have a keen interest in all martial arts like Karate, boxing and Krav Maga and I feel strongly about Combat Systema as it is in a number of ways similar to Aikido: practical in the modern world context, breaking out of the boundaries of traditional Martial Arts forms.


Adrian can be reached at:

Adrian can be reached at:


And the classes he teaches are at the following schools: