David’s Other Credentials Include:

Born and raised in Coopersburg, a small town just outside Allentown Pennsylvania. David began his life long journey of discovery in the martial arts in 1980′s under the tutelage of Shorin Ryu Master Vince Ward in Mountainville Pa.

David next went on to study Pai Lum Kung Fu under Sifu Bob Burral. In 1982.

He began his study of Kosho Kenpo Ryu under the guidance of Master Ed Hartzell of Easton Pennsylvania achieving the rank of Second Degree Black Belt. All through his training David realized that there were indeed deeper secrets to be uncovered within the martial arts.

Thus began his life long journey and personal mission to uncover those secrets and the master keys to unlocking them.

David’s personal quest to unlock the secrets for releasing the hidden potential in all human beings through the martial arts led him to study not only martial disciplines from many countries, but other mental, physical and metaphysical disciplines as well.

David soon discovered that there were indeed many common denominators between the purported stories of legendary martial arts masters and masters of other spiritual disciplines.

In earnest David began searching for the links, the common denominators, between these seemingly diverse groups of people who shared similar abilities. During his study and research he had discovered many areas of overlap and many common denominators.

David’s research also led him to begin a deeper study of many Chinese medical, martial and meditative disciplines. David is a licensed acupuncturist in the state of California as well as holding Diplomate of Oriental Medicine Status through N.C.C.A.O.M.

In addition David has continued to broaden his research into other Mind Body and Bio-energetic disciplines in an effort to gain a deeper understanding of the possibilities that the study of the martial arts have unlocked.

David also continues to broaden his expertise in the martial arts and also currently holds the rank of Basic Instructor in Modern Arnis from the Late Grand Master Remy A. Presas and a 4th Dan in the art of Shaolin KunTao under Grandmaster Frank Arteese.

As the founder and program director of Progressive Energy Systems Inc., Grand Master Snyder has studied Reiki under several Reiki Masters. He is a Master Practitioner and Teacher of Usui Shiki Ryoho as well as the creator of the Progressive Reiki System™.

David is a Certified Pranic Healer ™ and a Tai Chi and Chi Gung instructor and a Past President of the American Association of Remote Viewers Inc. of Florida. He is a certified Master Practitioner in Neuro- Linguistic Programming™ and certification as a Master Hypnotist in traditional and Ericksonian hypnosis. David teaches workshops and seminars all across the United States. He is the author and creator of the Neuro-Defense Protection System: A Women’s Self-defense Program.

David has personally trained and worked with many members of the law enforcement, entertainment, martial arts and hypnosis communities, teaching advanced mind/body technologies for peak performance and persuasion.

David is the founder and creator of the CPI: Conversational Persuasion & Influence System™.

In addition to his many credentials in the field of hypnosis and NLP, David holds a Master of Arts Degree in Acupuncture and Oriental Medicine from Southern California University of Health Sciences where he pioneered the use of hypnotic technique in combination with acupuncture therapy.

David Conducts Seminars, Trainings, and Special Classes throughout the United States on the topics of Energy, Persuasion, Healing and Martial Arts for More Information about upcoming seminars and classes. Be sure to check out our website at: 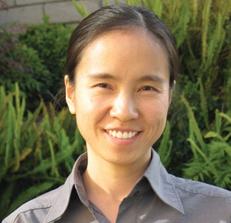 
Dawn Liu has been a martial artist for over 20 years, with a diverse background in different systems including Tai Chi, Aiki-Jujitsu, Escrima, Kyusho Ryu Kempo, Boxing, and Muay Thai.

She is currently a certified instructor of Cinco Mano Escrima, and an instructor of Wu Dang Tai Chi (the oldest lineage of Tai Chi).

Her passion for physical function and the potential of the human body with evidence based research has lead her through an unusual path of academic and practical pursuit. From her Ph.D. in Biochemistry and subsequent research as a scientist in an internationally known Bio-tech company, to a top ranking Sports Chiropractor and Acupuncturist, leading into an influential results oriented athletic performance instructor.

Throughout these pursuits, the one common thread that linked everything together is her love for Martial arts, which she believes hold the most important keys to unlock the Bio-Mechanical potential of the human body. Thousands of years of field-tested refinement in many martial arts systems, combined with modern day evidence based scientific research, have already and will decipher further more about the upmost efficiency system of the human body! It is this precise reason that drew Dawn into Combat Systema – the field-tested and evidence-based, no-nonsense yet open-minded, highly effective martial arts system. A marathon runner herself and an expert in Bio-Mechanics, Dawn has used many biomechanically based training methodologies derived from martial arts to help her distance runners to achieve incredible improvements on their performances! She looks forward to bringing her training as a Combat Systema instructor to help more martial artists and athletes to reach their maximum potential.

Dawn Liu can be reached at