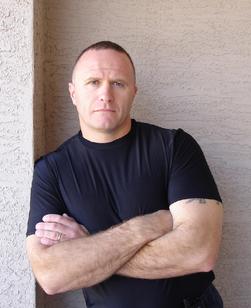 Phoenix director Mike Malpass is a police officer in Arizona assigned to his department's S.W.A.T. team. He has been a police officer in Arizona since 1996 and prior to that, he was an Ohio police department officer since 1992. Mike is a 5-time national kick-boxing champion and is still competing when he gets the chance in mixed martial arts and kick-boxing matches. Mike is a second degree black belt in Burmese Bando under Dr. Maung Gyi and a first degree black belt in Shotokan and Isshinryu Karate. As well as the Naban grappling found in the Burmese Bando system, Mike has also studied and practiced Catch-as-Catch-Can wrestling, Sambo and Brazillian Jujitsu. He holds the highest rank of Senior Instructor in Combat Systema.

Mike holds the following certifications from the State of Arizona through AZ POST:

Prior to being assigned to the Special Assignments Unit, Mike was assigned to his department's Tactical Training Detail. There, Mike taught courses in: Building Search, Active Shooter Response, Tactical Handgun, and Patrol Vehicle Tactics. Mike has also authored several lesson plans that are approved through AZ POST to be taught to his agency and for law enforcement personnel from numerous agencies in Arizona, as well as, military personnel who were about to be deployed overseas. These courses include: Ground Survival, Advanced Defensive Tactics Concepts, Dignitary Protection Defensive Tactics, Rifle Retention, Edged Weapons Defense, Team Arrest Tactics, and Women's Self-Defense classes.

With over 32 years of fighting experience in boxing, kick-boxing, and mixed martial arts, Mike has found a way to adapt the skills learned for sport into a reality based system designed for real-world force encounters.