Director Kyoshi Patrick Donahue started his formal training in the martial arts in 1976 at the age of six years old in American Kenpo, at a Dojo in Taunton, Massachusetts. In 1982, Kyoshi Donahue moved to Nashua, New Hampshire with his family and continued his training in Chinese Kempo. After graduating from high school, Kyoshi Donahue continued his martial arts studies with a more serious approach. Seraching for a true traditional Sensei, he finally met a Master Instructor, Sensei Sali Azem, and began training with him in 1988. In 1990, Sensei Azem offered Donahue an opportunity in what is considered the most serious type of training possible, ushi dashi (special apprentice or live-in apprentice). Donahue continued this method of practice till 1995 and still continues to study with Sensei Azem to this day as a humble student. 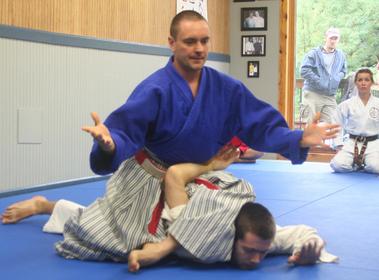 On Kyoshi Donahue's nineteenth birthday, he received a gift certificate from his father to train with Soke Mike Pabst. Kyoshi Donahue began studying with Soke Pabst in 1989 and continues his studies with Soke Pabst to this day as one of his direct students. Through Pabst Soke, Kyoshi Donahue met and trained with some fo the highest ranked and skilled Aikido and Aiki Ju Jutsu instructors in the world, including Soke Thomas Burdine (Aikido), Master instructor Seiki Tanaka (Tomiki Aikido) and the late Master Masatake Sekkiya (Aikido).

Kyoshi Donahue's School of Budo is an independent dojo, continuing to grow with the humble guidance of Kyoshi Donahue's main teachers Sensei Sali Azem and Soke Mike Pabst. It benefits from his vast training experiences from around the world, including throughout the United States, Canada, Europe, Australia, Okinawa and Mainland Japan. He continues his personal training and research with some of the most respected Sensei in the world today.

This list is a very small fraction of some of the teachers that Kyoshi Donahue has trained with either extensively, or in repeated seminars:

Kyoshi Donahue is a certified practioner of Koho Shiatsu (acupressure) and has provided treatments in several locations all around Vermont, New Hampshire and Massachusetts. He continues to teach and study the healing arts as part of his Budo. Kyoshi Donahue also practices and teaches Zen meditation and Eastern philosophy. In addition to this work, Kyoshi Donahue has taught Non-Violent Crisis Intervention to private group homes and other psychiatric residential care facilities. He worked at one of the largest psychiatric hospitals in the U.S. doing mental health work and crisis intervention for over six years. Kyoshi Donahue has taught Budo (as a fully accredited course) at Mariboro College, a well known liberal arts institution in Mariboro, Vermont, and has run countless programs at various elementary and high schools in the region.

Kyoshi Donahue has branch dojos in: